Before I launch into my regular blog post I have business items.

First, Thank you Carol of Beyond Literacy for such a thoughtful Poetry Swap. I squealed with delight as I opened it for a few reasons. The poems are original, personal and some are from Carol's famous galleries. I love the care she put into making a personalized chap book!

I am in the process of leaving facebook. I've wanted to leave for a while....and I'd like to stay off until at least after the election if not permanently. I followed the advice of this article: 5 Steps to Leave Facebook the Right Way.

You will notice that I have unfriended every single contact. This is not personal. I'm not ticked off with anyone...it's just that fb needs my information (including who my contacts are)more than I need it and, I need a break! I'm thinking about ways of staying in touch with folks after facebook. Stay tuned.

Virginia just made Juneteenth an official state holiday. This is a major move for the former Confederate Capital. I am thrilled with this and many other culturally responsive changes in Virginia to #BlackLivesMatter.

Simply put, Juneteenth is the day in 1865 that the Union Army freed slaves in the western most part of the former confederacy. Until the Army announced that slaves had been freed earlier, by the 1863 Emancipation Proclamation, slaves were not informed of their freedom.

Juneteenth has been celebrated ever since.

Except, I had never heard of Juneteenth in my kindergarten through post graduate schooling. It was well into adulthood that I heard the word, Juneteenth.

This week, singer Pharell Williams stood with Governor Ralph Northam to announce the establishment of the holiday.
I took words from the article below to create a found poem. 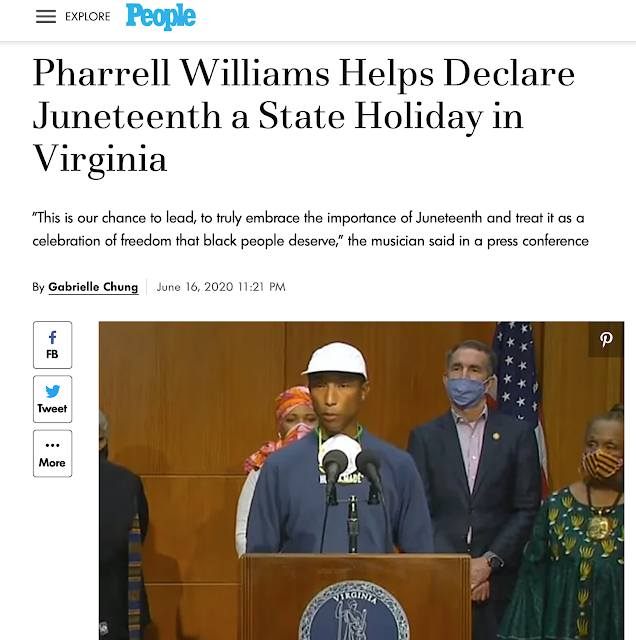 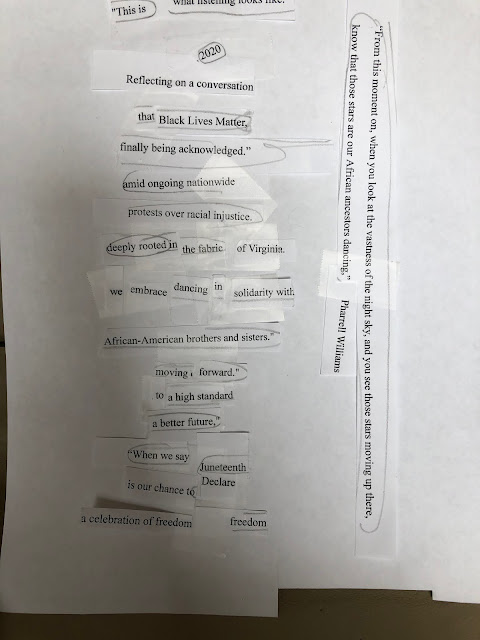 ...you see those stars moving up there, know that those stars are our African
ancestors dancing...  Pharrell Williams 6/16/20

We embrace dancing in solidarity with
African American brothers and sisters
moving forward
to a high standard
a better future.

When we say Juneteenth
it is our chance to declare
a celebration of freedom.


Thank you to today'sPoetry Friday host