I'm so glad to see you here. I hope you got sun on your face this week and are headed into a wonderful weekend.

This April, our friend Tabatha invited all of us to celebrate Naomi Shahib Nye and her poetry in this week's round-up hosted by Mary Lee at A Year of Reading. Soon after Ms. Nye was named Young People's Poet Laureate by the Poetry Foundation, appointed after Margarita Engle's 2017-2019 term.

Even before hearing the exciting Young People's Poet Laureate news, I was trying to think of an idea good enough for such a round-up. I wondered...what would Naomi Shahib Nye tell me in this situation of feeling overwhelmed--of wanting to write something worthy?

I googled several interviews (links below) and found myself jotting down lines from Ms. Nye. Guess what? The lines I jotted down became a poem of what Naomi Shihab Nye told me about her and about her poems and about me and my poems. I'll bet you can find yourself in there too.

In the meantime, notice
voices
Write a letter to yourself
ask questions
you don’t have to answer.

a word as a single oar
see how it rubs against other words
it doesn’t cost anything.

Allow a practice
of writing--
thoughts as text
living a poem
another mystery
a pleasure.

This week's poetry round-up is hosted by Dani at Doing the Work that Matters. Hop over to her blog and find all kinds of poetry for the holiday weekend.

I've had some fun with research recently that led to this blog post.

When my grandparents home was cleared out, my aunt gathered photographs and slides to scan and save digitally for posterity.  I am most fortunate to have photographs of people in my family tree much farther back than I can remember because of her efforts.

Additionally, I'd inherited one of my grandmother's recipe boxes. The box was full of hand-written cards, newspaper and magazine clippings--even some ripped off back-of-package recipes. I love that little box of Grandma so much I made a cookbook of sorts illustrated with the photograph collection to share with my sisters a few years ago.

One photograph shows my grandmother as a young woman reading a magazine. I tried to find that specific magazine volume by hunting for the tiger on the cover. I looked in Library of Congress, online archives and Ebay. I couldn't find that Collier's Weekly cover anywhere...and eventually gave up. 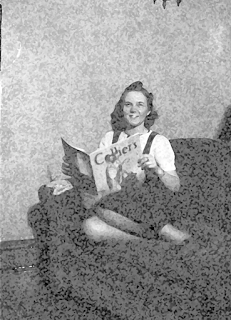 Flash forward to a week ago when I was perusing Pinterest and saw some antique Vogue covers... when it dawned on me that I had never looked there for my grandmother's magazine. It took me less than a quarter hour to find it... Collier's Weekly Magazine from February 4, 1939.

The photograph of my grandmother...who I imagine was smiling for her boyfriend...to be husband, my grandfather, became the inspiration for a pantoum draft.

I've been researching the 1930s. Some people I've focused on weren't famous. I've gotten to know them through records left behind. There's mention of one of my subjects in this 1939 issue of Collier's. So fun! It kinda feels like my grandmother wanted me to find them.

If you want to peruse this issue of Collier's, you can here.
Posted by Linda Mitchell at 5:01:00 PM 14 comments:


It's lovely to see you and all your poems.

Thank you writing inspiration, Margaret Simon, for hosting this week's round-up at Reflections on the Teche.

I've been on a Gwendolyn Brooks kick lately.

Ms. Duncan is enjoying much deserved success with her exquisite picture books including A Song for Gwendolyn Brooks (Sterling 2019). AND she's a working school librarian--which makes this school librarian's heart skip with happiness.


In Michelle's Spotlight interview, Ms. Duncan discussed Brooks' writing. I checked Song out from my local library immediately and met Gwendolyn. I loved seeing how her parents were her first patrons. I cheered as Gwendolyn succeeded and succeeded and succeeded. If you haven't read, A Song for Gwendolyn Brooks yet, please do. You will be much richer for having read it.

Then, what to my wondering eye appears? But, Out of Wonder by Kwame Alexander with Chris Colderly and Marjory Wentworth checked, back IN to my school library. It was re-shelved...for the tiniest bit before I checked it out myself.

Alexander's poem in the style of Gwendolyn Brooks on p. 28 caught my attention...how could it not? I still had Duncan's lovely Song in my head.
Two weeks ago, Renee LaTulippe and Lee Bennett Hopkins published episode 4 of their History of American Children's Poets of the Twentieth Century: 1950s.  This is a spectacular free video-series of poetry history gems. Check it out!

Guess who was featured? Among others....your'e right...Gwendolyn Brooks. Honestly, it felt like a tap on my shoulder from Gwendolyn herself.  I googled Brooks and found the fabulous article below with more of her children's poems...at Brain Pickings:


All these meetings with Brooks in her poems and in commentary on her life's work led me to a poetic response to the person and the children's poet.

for joy and sorrow
belong in literature
poetic portraits

the tremendous gift
poems for and about children
playful and poignant

many of the poems
connection, darkness and light
beyond childhood


And finally a response in the style of Gwendolyn Brooks' Bronzeville Boys and Girls (Harper Collins 2006):

Gemma’s in the backyard
toes all up in mud
earth worms surround her
on high ground from a flood.

Gemma loves the worms
she talks to them and plays
that they are little children
to mind her little mama-ways.

It’s getting on toward dinner
today's sun is sinking low
Gemma gently scoops up worms
and rocks them to and fro.

She sings a goodnight worm song
a sweepy tune for sleep
tucking worms in drier dirt
then runs inside on muddy feet.

Is it a beautiful day for soccer where you are? I hope so. Many friends we know are celebrating the book birthday of Soccerverse (Wordsong 2019), by Elizabeth Steinglass...who is our host for this week's round up.

Liz's book of poems about soccer make it perfect for just about all 32,000,987,000 students I know (OK, maybe that's hyperbole). Seriously, join in the celebration and visit her this week at her blog: Elizabeth Steinglass--Poetry for Children and Their Grownups.

Last week, Michelle Heidenrich Barnes interviewed Liz about lots of things including her new book at Today's Little Ditty. By the end of the interview, Liz had kicked up this month's Ditty Month Challenge (DMC) : 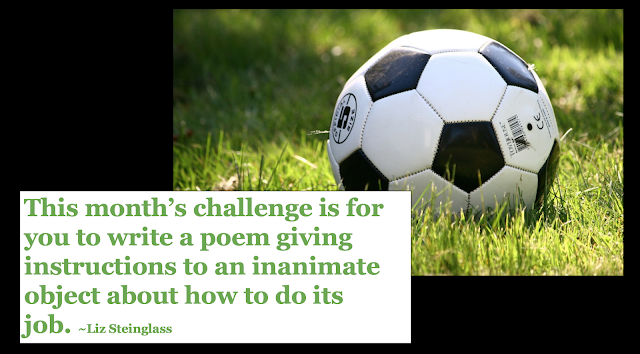 As High School graduation approaches, I've been absorbed in the fun and details of senior year with my daughter. Of course my ditty is related to graduation. 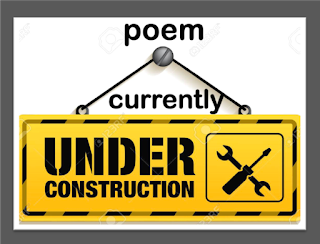 Shaking Things Up by Susan Hood

I'm overjoyed to welcome May and its tender flowering. Love it!

Today's Poetry Friday round-up is hosted at Jama's Alphabet Soup. If you've not visited this blog before, you are in for a treat. Jama expertly combines literature and delicious foods in the most amazing ways. Spoil yourself--there's no calories in reading!

Like many Teacher-writers, I have this growing pile of writing that I think maybe I'm ready to start sending out to editors and agents. One part of that process is knowing what I've written and who I've written for. I reached out to other authors with questions about how to do this.

One suggestion I received was to read, Shaking Things Up: 14 Young Women who Changed the World by Susan Hood (Harper Collins 2018).

This is a beautiful book for  many reasons. I'm going to try to be brief...and here's the spoiler. You need to read it.

My small confession is that...I grew up perfectly fine...conservative from a rural area. I never had to worry about not having what I needed. My parents loved me and provided a family for me, my sisters and then husbands and grandchildren. To cut a long explanation short...I have had the privilege of not understanding how beholden I actually am to so many strong women who have come before and surround me.

Now that I'm well a grown-up and am in charge of fulfilling my own information needs I am drawn to stories of women who changed the world...and there is a book just for that...Shaking Things Up.

The variety of change-makers demonstrated in this book is fantastic. We begin with Molly Williams from the 1780s and, who I had never heard of and move on to inventors, doctors, code breakers, astronauts, architects, activists...all beautifully detailed, in short biographical POEMS!


I would have loved this book as a child...and I do now as an adult. Each poem tells one woman's story in detail that satisfies me. But, there are short notes in prose to ground facts at the end of each poem.

For Teacher-Librarians, this book provides significant facts within the poetry, endnotes, back matter and timeline. Furthermore, the crew of illustrators that bring these biographical poems to life is ah-MAZ-ing including the work of ... 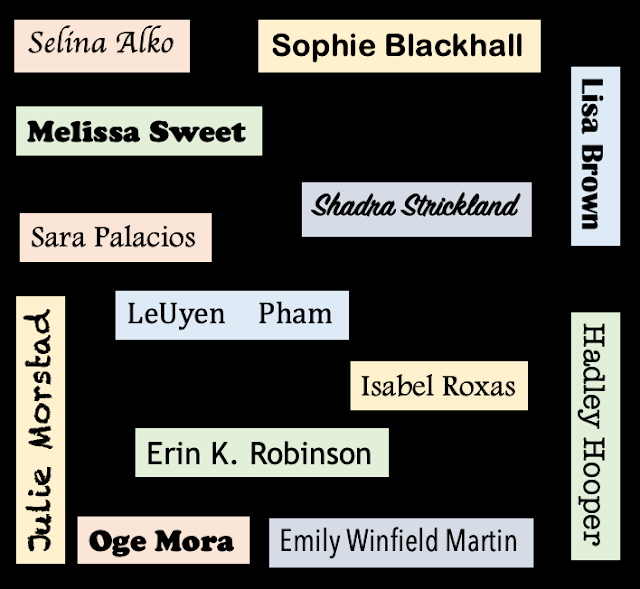 The rich timeline places each woman in context of each other is well done. And, beautifully illustrated back matter makes you keep reading every single page. I could easily use Shaking Things Up with elementary students and middle/high school students who can handle complexities of biography but need an easier reading level. I love that the story....the STORY of these women is what shines first and foremost as I open this book.

As I writer I find much mentoring in the poems, book organization and design. Ms. Hood includes the words of the women themselves in the poems, endnotes and even in her author notes. Each quotation is memorable and inspiring. The sources, Books, Websites and More pages are filled with great information and places one can go to on the internet in an instant to find out more.

Come for the story....enjoy and stay for the learning. And, be thankful for the shoulders of giants on which we stand.
Posted by Linda Mitchell at 5:57:00 PM 13 comments: