Poem Pairing with The Incredible Magic of Being

Written for a visit by Kathy Erskine to Prince William School Library Association Meeting.....but really, a review and poetry pairing.

I have the pleasure of welcoming author and our friend, Kathy Erskine, to our gathering at Bookworm Central.

As you know, Kathy has won acclaim for her YA and MG novels. She has that wonderful amalgamation of curiosity, smarts, talent, open-mindedness in her very big heart for young people and the young at heart.

I've read almost all of Kathy's books. Mama Africa How Miriam Makeba Spread Hope with Her Song was published almost simultaneously with The Incredible Magic of Being....which puts me a little bit behind -- but not for long.

If you have not had a chance to take a peek at The Incredible Magic of Being, I hope you do soon. This book is perfect for ages 7-14. The mission of its main character and unisensor, Julien is to let us know that....it's going to be all right. The Universe really is an incredible place and none of us are going to slip through its cracks. Just take time to stop and notice. And, there are funny threads too like talk of burning s'mores and FARTS (Facts and Random Thoughts).

In the voice of Julien, Kathy asks readers to notice the unknown..the incredible...the magical and persist with questions even in the face of doubt, because it's how we all achieve the impossible.

What a beautiful message for today.

On her blog, author-poet Laura Shovan sometimes pairs newly published kid-lit novels with poetry. I'm going to give that a try. The Spinning Earth, by Aileen Fisher, suits Julien at age nine, the age he is in The Incredible Magic of Being.


The earth, they say
spins round and round.
It doesn't look like it from the ground,
and never makes
a spinning sound.
And water never
swirls and swishes
from oceans full
of dizzy fishes,
and shelves don't lose
their pans and dishes.
And houses don't go whirling by,
or puppies swirl around the sky,
and robins spin instead of fly.
It may be true
what people say
about spinning
night and day...
but I keep on wondering anyway.

When I Heard the learned astronomer
BY WALT WHITMAN
When I heard the learn’d astronomer,
When the proofs, the figures, were ranged in columns before me,
When I was shown the charts and diagrams, to add, divide, and measure them,
When I sitting heard the astronomer where he lectured with much applause in the lecture-room,
How soon unaccountable I became tired and sick,
Till rising and gliding out I wander’d off by myself,
In the mystical moist night-air, and from time to time,
Look’d up in perfect silence at the stars.

Thank you for joining us and sharing some of the magic of the universe with us tonight, Kathy.

Spooked as a Child--You Too?

If you haven't had a chance to meet author Carrie Clickard, I recommend it.

I was introduced to her by Michelle H. Barnes in her SPOTLIGHT ON interview at, Today's Little Ditty, two weeks ago.


Each month, Michelle holds a DMC (ditty monthly challenge) and I try to keep up with the rest of the poets that always have the best ideas.

This month's challenge is: Write a poem about a person, place or thing that spooked you as a child.

I accepted the challenge but then the blank page loomed large. I have no shortage of spooked experiences....but how to encapsulate even one.

I shouldn't have fretted. Kat Apel saved me by introducing a cool poetry form, tetractys, She shared some on her blog last week. I knew this form was perfect for a spooky topic.

Once I got started, I kinda couldn't stop. So, I will limit this post to three tetractys. The first one is shared on the DMC Padlet.  Have fun being creeped out over there!

The
monster,
Oscar awaits
in the cellar under the sump pump door.
Uncle Tom gently
opens the hatch.
He roars --
Run!

This week's Poetry Friday is hosted by Leigh Anne Eck at A Day in the Life. And, you can find her moderating #TeachWrite in her spare time (ha!) She's working hard in grad school these days but is graciously making sure we all have some poetry to enjoy this week. Thank you, Leigh Anne.

As I read them I had an, I want to try that, feeling. There are several places in my current work in progress to place an aubade. However, I've never written one before.

I needed a mentor text to practice with. I went in search of poems of goodbye. The lyrics to Taps work even though the song is a vesper. All the feels are still there, don't you think?

My practice aubade is a riff on Taps prompted by this stunning autumn sunrise photo from my first home in western New York. Much applause to John Kucko for capturing this shot from Portageville and posting it on facebook--and friends for sharing it. 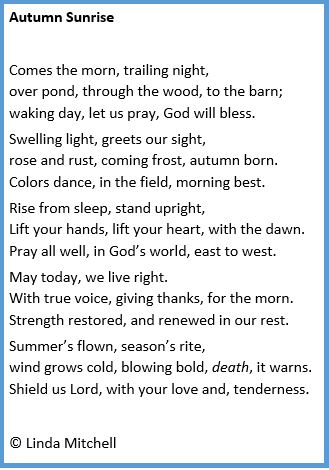 Be sure to enjoy Poetry Friday fun with this week's host, the aforementioned Irene Latham at her blog, Live Your Poem. You will love all her writing. I am so looking forward to meeting her in Phoenix at the American Association of School Librarians conference coming up in November.

Brace yourself for a selfie, Irene!
Posted by Linda Mitchell at 5:29:00 PM 19 comments:

Thank you, dear Violet Nesdoly Poems for hosting the playground of Poetry Friday this week. I have such fun running around with my friends and all their words.

I'm having fun with found haiku. It feels as satisfying as what sudoku must feel like for some people (I have no idea...all those numbers that must be in the right spot gives me a nervous tick). Give me words....lots and lots of them!

It's October--time to play with autumn!


A Letter in October
By Ted Kooser

Dawn comes later and later now,
and I, who only a month ago
could sit with coffee every morning
watching the light walk down the hill
to the edge of the pond and place
a doe there, shyly drinking,

then see the light step out upon
read the rest here

1.
watching the light walk
at the waiting window found
no more than my face

2.
sowing reflections
at the waiting window found
a garden of trees

3.
later and later
at the waiting window found
beyond me, darkness