Recently, I listened to Trevor Noah’s autobiography, Born a Crime.  Noah, born in 1984 South Africa of a Caucasian Swiss father and a Black South African mother was literally a crime. Noah spins story after story about his difficult growing up in South Africa in apartheid before he became a famous comic and current host of The Daily Show.

The experiences that Noah expressed were beyond anything I can imagine. Never have I been so acutely aware of the privilege I enjoy as when I listened to his life story. A seed of curiosity of  South Africa was planted in me.

This post is not about Trevor Noah. His book was the seed.

Kathryn Erskine’s picture book biography of Miriam Makeba, Mama Africa! (Farrar, Strauss, Giroux 2017) just came out.  I had an opportunity to hear Kathryn speak at a gathering at Bookworm Central and I picked up this book…the seed was growing.

I have to admit….I had never heard of Miriam Makeba. Mama Africa! is a beautifully crafted work of the life of Makeba. Makeba’s singing was banned in South Africa and then she, herself, was banned from returning to South Africa after testifying about apartheid to the United Nations.

What endeared Makeba to her fans was her song in African languages: Xhosa, Zulu, and Swahili. She sang truths white Afrikaners could not face.

I don’t know how one can read Mama Africa! and not run to youtube to hear her music. (Thank goodness for youtube). Since reading Erskine's book, I find myself searching for just one more song. One youtube video has a summary of Makeba's life with some song. See it here.

Liberian poet and Penn State University Professor, Patricia Jabbeh Wesley penned a memorial poem about Makeba on the occasion of her passing in 2008.  Enjoy the poem, read the book, listen to the music…feel Mama Africa’s rhythm. It is a heartbeat. 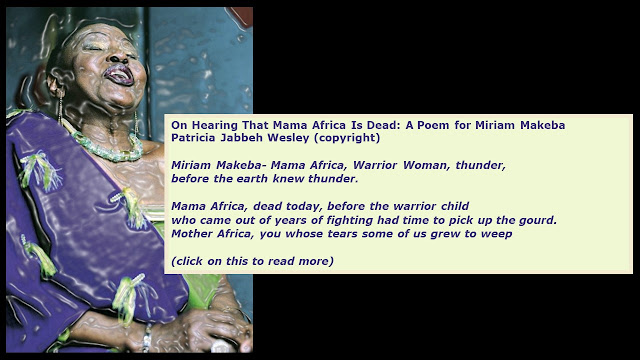